The Real Story behind The Miraculous Medal 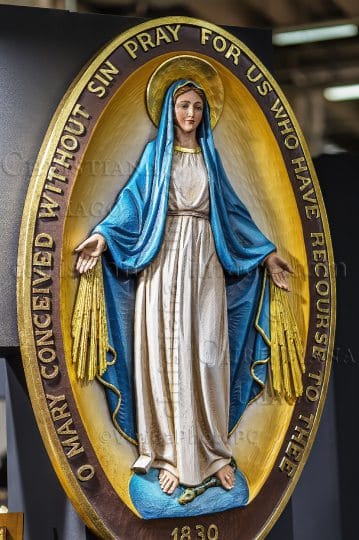 What is the Miraculous Medal?

What is The Miraculous Medal?

But there is no superstition or magic connected with the Miraculous Medal.

Between July and December 1830 the Virgin Mary appeared to Sister Catherine Labouré on three occasions.

Sister Catherine was a novice of the Daughters of Charity in the convent on the rue du Bac in Paris.

The Second Apparition: the Miraculous Medal

The Second Apparition on November 27, 1830: at 5.30 p.m. The Blessed Virgin appeared to Sister Catherine in the chapel.

Catherine saw something like two living paintings: notably one fading into the other.

In the first image, Our Lady stood in a white silk dress upon a half-globe: her feet crushing a serpent.

The Blessed Virgin held a small golden globe topped with a cross.

Mary lifted it up toward heaven.

The Blessed Virgin said “This globe represents the entire world, including France, and every person.”

In the second image, beautiful rays of light stream from the Blessed Virgin’s open hands.

Sister Catherine heard : “These rays are a symbol of the graces that I pour out on those who ask them of me. The gems from which rays do not fall are the graces for which souls forget to ask.”

Then an oval formed around the apparition. Catherine saw in a semi-circle this invocation in gold letters: “O Marie conçue sans péché, priez pour nous qui avons recours à vous” (“O Mary, conceived without sin, pray for us who have recourse to thee”).

Sister Catherine heard “Have a medal made according to this model. For those who wear it with confidence, there will be abundant graces.”

Then Catherine saw the reverse side of the medal.

The letter M topped with a little cross and two hearts below: one crowned with thorns (the Sacred Heart of Jesus) and the other pierced by a sword (the Immaculate Heart of Mary).

After The Third Apparition

The Third Apparition in December 1830: The same image of the medal appeared near the tabernacle. “These rays are the symbol of the graces that the Blessed Virgin obtains for those who ask them of her…You will not see me anymore.”

Later, Sister Catherine was assigned to the Hospice of Enghein to care for elderly men: she still felt that the medal must be struck.

The medal was minted and shared: it led to such gifts of grace that it came to be called “The Miraculous Medal.”

In particular during cholera epidemic of 1832, the Daughters of Charity began to distribute the first 2000 medals. Cures accumulated. Protection from the disease spreaded. Conversions happened.  That was overwhelming.  When released, the medal was called the Medal of the Immaculate Conception. The people of Paris began to call the medal “miraculous.” (in French, Médaille Miraculeuse)

Why you should wear the Miraculous Medal?

Three intimately connected aspects come from the sentence on the Miraculous Medal : “O Mary, conceived without sin, pray for us who have recourse to thee”.

Mary’s identity is explicitly revealed to us: the Virgin Mary is immaculate from the moment of her conception. The power behind her intercession for those who pray to her comes from the privilege derived from the merits of the Passion of her Son Jesus Christ.

This is the reason why the Virgin invites everyone to have recourse to her in the difficulties of life.

Again: There is no superstition or magic connected with the Miraculous Medal. Then again: It’s not an amulet, it’s not a good luck charm.

I should visit the Chapelle Notre-Dame de la Médaille Miraculeuse  indeed! Coming with me?

You can read my previous post about Hidilyn Diaz here

And you can read my post about The Novena of the Miraculous Medal here.